Lets start by checking the growth of programming languages from the year 2013 to 2015. 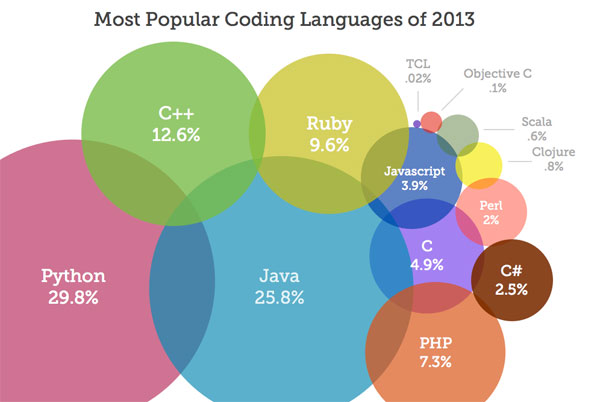 A lot of freshers in India want to get in the IT Industry. The primary designation in such an industry is of a “programmer” or “Coder”. You are supposed to write clean code that is logically correct, syntactically well formed; understandable by others and meet the expected output. But the irony is – most of the “so-called programmers” enter into this profession not by choice; but by chance. The biggest motivation is the fast money they can earn from the software profession. But it is proved time and again that people who jump in to the software industry for money, don’t often make it big in the long run. They are either sidelined in to less mainstream functions or they themselves go into software testing and other support functions.

So… How to know if you have a coder inside you?

Simple… just ask yourself if you enjoy programming? Would you do it even if people didn’t pay you for it? Does time flies away when you code with no recollection of whats going around you?

If the answer is yes… chances are you are a programmer. Not by chance; but by choice. And that makes a lot of difference to your attitude or profession as a programmer later in your life.

Here are 10 booming programming languages you must consider this year and start learning to improve your skillset. It is latest HTML standard for constructing and presenting content on the World Wide Web. It’s a core technology of the Internet, which was originally proposed by Opera. It is the fifth edition of HTML standard and is still under the process of improvisation, but tons of sites have already started using it.

Its core aim is to improve the language that supports the latest multimedia. It is readably by humans and consistently understood by web browsers, parsers and other devices. It is not only intended to subsume HTML 4, but also XHTML1 and DOM2HTML. Ruby on Rails is the easiest way to get real web applications going. It just looks great for previous Java developers as it can do a lot with the coding complexity, by creating skeleton applications that can be modified easily. Ruby is the programming language and Rails is the web application framework that would put everything online.

One needs to get the hang of Ruby-on-Rails if they really want to develop contemporary web apps over a small span of time! It is a scripting language that is intended for developing embedded applications. Tcl has gained acceptance on its own; it is generally used for prototyping rapidly, scripted applications, GUIs and testing as well.

It is used on embedded system platforms in its full form as well as in other small-footprints, and is yet to get enough acclamation. C# is a multi-paradigm programming language that encompasses strong typing, declarative, imperative, functional, generic, component-oriented, and object-oriented, programming disciplines. It was initially created by Microsoft within its .NET initiative and later it was approved by Ecma and ISO. It is one of the programming languages to be designed for Common Language Infrastructure. It is a reflective object-oriented programming language that has added Smalltalk-style messaging to C programming language. Currently, it’s used basically on Apple’s Mac OS X and iOS. It was originally the main language on NeXT’s OS, so it’d certainly add some value to your portfolio especially if you’re into mobile/iPhone app development field. Clojure is a new dialect of Lisp programming language. It is a general-purpose language that supports interactive development encouraging a functional programming style.
It also simplifies the multithreaded programming.

It runs on Java Virtual Machine, CLR and can be compiled to JavaScript. The language seems to have some good impact on StackOverflow and GitHub.

It is having a solid Tiobe ranking as there is a boom for Lua now, but it’s yet to gain enough publicity in the market.
LUA Tutorials >>

PHP is probably the most popular scripting language on the web. PHP is known as a server-sided language. That’s because the PHP doesn’t get executed on your computer, but on the computer you requested the page from(a web server). The results are then handed over to you, and displayed in your browser.

PHP is available for the two most popular Web server configurations (IIS running on Windows NT and Apache running on UNIX). Perhaps the most consistently growing programming language over the last decade in the history of software industry. Python is a general purpose, high-level programming language; its design philosophy emphasize on code readability. It boasts of remarkable power with a very clear syntax and its standard library is comprehensive in itself.

Clearly, majority of the programming languages that are growing at a fast pace are open source based. Most of them run on the open source Linux based Apache Server. Also with Apache Hadoop and Big data boom; there is a lot to learn and implement with Open Source Tools.

So, if you really want to establish your identity as an excellent programmer today, you got to learn these new programming languages, and add some weight to your portfolio, and outshine the world!

If you think of any other emerging programming language ; let us know in your comments, we are listening…

Is Digital Marketing a right choice after your education?